Could you imagine the worse week of your life ending with a trip to HAWAII?  Well neither could I until it happened to me.
On Monday December 12th 2011 "THE DAY" when we found out my husband's bone cancer was back, were put into a whirlwind of tests.  And on December 14th they scheduled a small surgery to biopsy the cancer to see what stage it had moved to.
I can't recall the last time I sobbed, but driving him home from that surgery it all started to hit me. 'What would I do if I lost my best friend, how could I go on without him?  If he survived  (and lost his leg like they were stating was the route they would have to take) how drastically  would our lives change?'
I could envision his dreams of coaching our boys baseball teams, him giving our kids piggy back rides, the way he laughed-I could lose him....and then what?   So as I gripped the steering wheel I cried, like I can't remember crying ever before, all to my embarrassment, while he listened.  I felt guilty for letting him hear me cry like that.
So that night, when we got home, my father in law called and said "Pack your bags, you and Clint have an 8:30am flight to Hawaii for the weekend to escape reality." We were going to be leaving Thursday morning, have the weekend, and be able to fly through the night on Sunday to be back just in time for his 10:30am doctors appointment Monday morning!
How do you thank someone for a gift so....AMAZING, so.....PERFECT!? Now, instead of the family funeral procession for the weekend, we would be getting away where nobody knew our problems....where we could think about something else other than our recent dish of reality!!! There are no words for the gratitude we have for that gift.
For the plane ride I (OF COURSE) brought knitting.  On the flight over I turned to Clint and asked him what I could make him that he could use.  He thought for a second and replied  "Fingerless Gloves?"  So I had a mission: 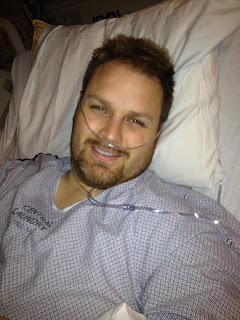 to design THE perfect pair of fingerless gloves for my Cancer Warrior!

As he tried on his perfect pair he looked at me and said "You know what you should do?  Make a pair for Dr. Randall and we could give it to him on Monday as a Christmas present!" Perfect! I now had another pair to make. 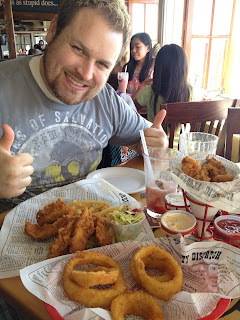 The FOOD. (Bubba Gumps you will now be apart of our top 10 BEST entree's EVER!) 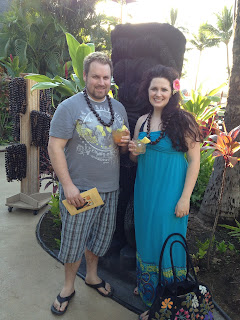 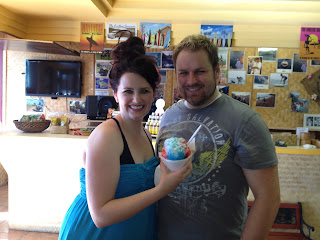 not to mention eating at least one snow cone everyday (obviously calories were not worried about either), Hawaii style with ice cream on the bottom and Kauai cream on the top! (NOBODY makes better snow cones than Hawaii-period) 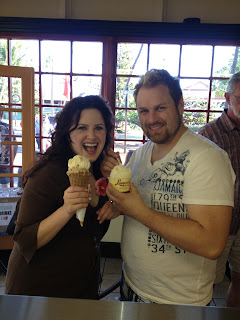 and having a DOUBLE scoop of Lappert's Ice Cream!  {side note}I am an ice cream connoisseur, and this ice cream has been in my dreams for years!  I had put my lips to this succulent stuff when I came with my family to Hawaii over 15 years ago!(I know if you look closely my size is triple his and I'll admit....I'm a FREAK!) 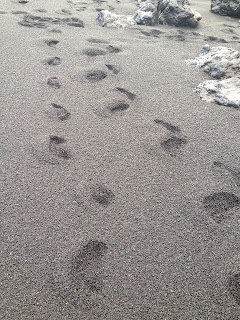 But most importantly walking hand in hand with my man while..... 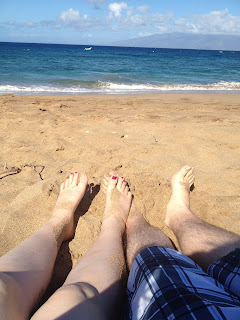 our problems melted into the sand.
On Monday morning (with sand still between our toes) we were back in the doctors office, back to reality.
Clint and I had just enough time to wrap our hand knit fingerless gloves with a note:

Posted by Clint The Cancer Warrior Family at 3:45 PM